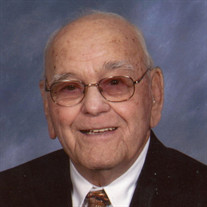 Billie Joe “BJ” Fouts age 95 of Iredell, TX passed away November 4, 2016 in the Clifton Hospital. Services were held 3:pm. Monday, November 7 at the Iredell Baptist Church, followed by graveside services at Mitchell Cemetery. BJ was born July 26, 1921 to QA and Grace Harris Fouts. BJ married Jewel McDonel on December 25, 1940. BJ was a lifelong resident of Iredell. He temporally resided in Dallas- Fort Worth area prior to WWII and California before deploying to the Pacific Theater during the war a a seaman aboard the U.S.S. Napa assault ship where he participated in several campaigns including the February 1945 land of the Marines on the island of Iwo Jima where he served as crewman of one of the Napa’s landing craft. BJ owned and operated the Fouts Grocery in Iredell for several years until the business was lost to fire in 1965. Following that he worked briefly as a custodian at Tarleton State University before entering into a long career in the pipeline construction industry as an operating engineer. He was a member of International Union of Operating Engineers-IUOE Local 178, Fort Worth until his passing. BJ was a Master Mason for 70 years and served as Worshipful Master of Iredell Lodge 405. BJ enjoyed fixing anything that broke; often using creative and unusual methods. He was also a “tinkerer” and, among other devices, is remembered for a lead filled fairway golf driver and a resultant shoulder span. He was also known for homemade mustang grape wine that he shared with family and friends. BJ and Jewel traveled extensively during his pipeline career and often visited Las Vegas to visit grandchildren where he was well known for his remarkable consumption of bacon in the hotel buffets. BJ is survived by his wife Jewel resides at Hilltop on Main Retirement Center, Meridian; two children, Joe David and wife Kay, and Judy Benoit and husband Richard of Iredell; five grandchildren, Troy of Iredell, Melissa and Bobby Crabb of Fort Worth, Darrin of Las Vegas, Kimberly and David Payne of Seward Nebraska, and Ashley and SSgt. Jared Helgerson of Wichita Falls. He also has nine great and one great, great grandchildren.

The family of Billie Joe Fouts created this Life Tributes page to make it easy to share your memories.

Send flowers to the Fouts family.