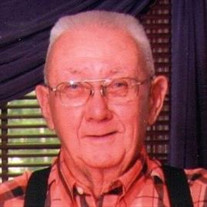 James Royce Keller, known to his friends as Sonny, was called home to be with Jesus on July 15, 2019 at the age of 84. Sonny was born in Hico, TX on June 18, 1935. He was preceded in death by his father Vertis McClendon (Pete) Keller and step mother Judy Keller, his mother Ina Amelia Murray and stepfather Otho Murray. The oldest of 3 children he was preceded in death by his sister Carolyn Sue Ince and is survived by his sister Wilda Fern Griffin of Hico. Sonny was preceded in death by his wife. Joy Vermell Chick was the feisty young lady from Dublin who captured his heart. After making a sacred promise to love, honor, and cherish her before God and witnesses he called her Sugar for the 65 years God gave them together. He is survived by daughter Rhonda Wynell Shaffer and husband Terry of Hico, TX , daughter Charissa Wade and husband Glenn Wade of Reno, TX, son James McClendon Keller and wife Denna of Hico. He was preceded in death by one grandson Damarius Keller and is survived by twelve grandchildren and five great grandchildren who affectionately called him Papa Keller and shared many happy times with him in his beautiful yard. He cherished time with his grandchildren, pushing them on the swing, picking flowers out of his yard, pulling them in the wagon, watching the birds, squirrels, and lizards or reading them stories. Sonny lived in Hico his entire life. He had a reputation for being a skilled auto mechanic and paint and body tech. He and his wife owned and operated Sonny Keller garage for many years. Prior to owning his own business he was employed at the Dublin Ford Dealership, Cranfills Gap Tractor and Implement, and Clifton Tractor. He was gifted by being able to fix almost anything, cars, lawn mowers, tractors, and many toys. He found great satisfaction in doing his work meticulously. In addition to keeping his customers cars in good repair he took time to keep mini bikes, go carts, and bicycles in good working order to the delight of his children. Sonny attended church as a boy, but it wasn’t until he was an adult that he had a life changing encounter with his Savior Jesus Christ. It was at that time he was filled with the joy and love for people for which he will most be remembered. He had the heart of a servant and was quick to help anyway he could. He had a deep faith and faithfully read his Bible every day. Sonny was a kind and compassionate man whose faith and gentle spirit impacted everyone he met. He loved people and always looked for the good in people. He liked old cars and pickups. He saw beauty and good in all things, and all people, and all situations. He was an avid gardener and was never happier than when he was working in his yard. Sonny and Joy worked together in an amazing way to build the pink house they loved, their auto-body business, and raise a family.

James Royce Keller, known to his friends as Sonny, was called home to be with Jesus on July 15, 2019 at the age of 84. Sonny was born in Hico, TX on June 18, 1935. He was preceded in death by his father Vertis McClendon (Pete) Keller and... View Obituary & Service Information

The family of James "Sonny" Royce Keller created this Life Tributes page to make it easy to share your memories.

James Royce Keller, known to his friends as Sonny, was called...

Send flowers to the Keller family.