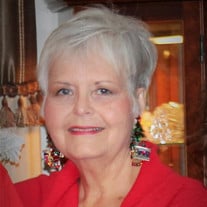 Obituary for Margaret “Peggy” Ann (Hagan) Wiseman Margaret Ann (Hagan) Wiseman or better known as “Peggy” was born on March 23, 1950 and passed away on August 17, 2017. Born in Natchez, Mississippi and lived there until she was 8 years old. Her mother was a member of the Natchez Garden Club and Margaret carried on the tradition until her death. Her family moved to Perth, Western Australia where she attended school at Loretto Convent. Her father was employed in the oil business and the family made many trips around the world; too numerous to name. Upon graduation Peggy attended St. Mary University in San Antonio and started her adventure back in the States. Loving mother to Jane Black and husband Bradley of Hico; Denise Natseway of Spokane, Washinton; Christy Blackbear and husband Darrell of Tulsa, Oklahoma; Edna Page and husband Ronnie of Rosharon, Texas. Loving grandmother to Stasha, Garrett, Brady, Ronnie Lee, Katie, Benjie, Pete, and Sonny. Loving great grandmother to Aubrey, Rylie, Fisher and Theodore. In her illustrious career she worked in telecommunications. She worked for the many banks that eventually became Bank of America. Peggy also completed many projects through XO communications and many more telecommunications companies. Her ability to manage people and projects was unmatched during her tenure in the industry. Peggy loved to cook, entertain, and socialize and travel. She made several extensive trips after she retired. Many items on her bucket list were fulfilled as well as many of her dreams. One of her last bucket list items she achieved was traveling down the Danuhe River in Eastern Europe for her 67th birthday with her childhood friend. Peggy was preceded in death by her parents Virginia Carol Hagan and Edward Emmett Hagan. She is survived by her husband Jerry Lee Wiseman of Hico; sister Catherine Ramage of Hico; brother Mike Hagan and wife Kate of Memphis, Tennessee; nieces Annie Demiglio and Husband Chris of Denton, Texas; Tina O’Jibway and husband Jeff of Austin, Texas; Halle Hagan of Washington D.C.; and Abbey Hagan of Tuscaloosa, Alabama; great nephew Lewis Emmett Ojibway; and aforementioned children, grandchildren, and great-grandchildren. Memorial Services for Peggy Ann Wiseman will be September 2, 2017 at St. Rose of Lima Catholic Church, 404 Mesquite Street, Glen Rose, Texas @11:00 A.M. In lieu of flowers the family would like donations to be made to the Hico Education Foundation. Send donations to P.O. Box 136 Hico, Texas 76457 or online at www.hicoeducationfoundation.org/donate.

The family of Margaret Ann Wiseman created this Life Tributes page to make it easy to share your memories.

Send flowers to the Wiseman family.