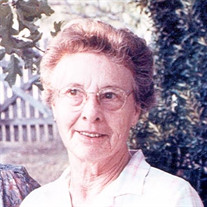 Services scheduled for Marguerite Blacklock Wolfe Burden Marguerite Blacklock Wolfe Burden was born September 17, 1918 and passed away at the age of 96 on February 24, 2015 at her home in Hico. She grew up in the Fairy and Agee communities located in Hamilton County. She was born to parents John McCarty Blacklock and Maggie Ora Lacewell Blacklock. She married Woodroe Harmon Wolfe on October 13, 1940 at his family home. He was killed on September 22, 1964 in Iredell, Texas while pulling a well. In 1972 she married Henry Adrian Burden. They were married for 35 years. Marguerite was also known as “Red” and “Nannie Red.” She loved to cook, sew, read and quilt. She taught all her daughters and son to cook good food and work hard. We also knew how deeply she loved us, her grandchildren and great grandchildren. She made from scratch biscuits nearly every morning and cornbread at lunch. She was also known for some of her own sayings: “If you had stayed home, it wouldn’t have happened!” Also “You can forgive them, but don’t forget their name. She always had biscuits and sausage/bacon on the stove for late morning visitors; especially brother Bill Schibler. After Woodroe died, she kept the dairy going, usually by herself and with the kids, Margo, Nellye, Jim and Jean. Marguerite was a member of the Hico First Baptist Church for many years. Marguerite was preceded in death by one son, Mikle Woodroe Wolfe and her two husbands. Survivors are daughter Margo Thiebaud of Hico; Nellye Gripp and husband, Monte, of Hico; son Jim Wolfe, of Iredell; and daughter Jean Ann Golightly and husband, Randy, of Iredell. Stepsons Hank Burden and wife Kathy, of Desoto; and Paul Burden and wife, Neatie, of Granbury. Sister Wynell Simpson. Nephews: Cart Jones and wife, Esther; Don Simpson and wife, Cindy; Gary Hutton and wife, Vickie; and Connie Hutton and wife, Neva. Grandchildren: Mandy Thiebaud of Farmington, MN; Angie Guldjord and husband, Matt, of Hico; Terry Davis and husband, Billy, of Iredell; Stacye Wolfe of Dallas; Britney Wolfe of Fort Worth; Marty Golightly and wife, Jodi, of Three Way; Jason Burden and wife, Kristi, of Nederland; Ann Gattie and husband, Tim of Seattle; Ben Burden; Sarah and husband, Charles Hughes. Great grandchildren: Roe Golightly and wife, Caitlin; Lane Golightly; Sidney Davis; Peri Thiebaud; Hayden, Hallie and Rylie Burden; August and Joshue Burden; William, Sophia and Edward Hughes; Aidan and Connor Gattie. A celebration of Marguerite’s life will be held at Hico First Baptist Church Fellowship Hall on Thursday, February 26, 2015 from 11am-1pm. Graveside services will be held at 2 p.m. on Thursday, February 26, 2015 at the Fairy Cemetery. Services provided by Harvest Hills Funeral Home, Hico, Texas. Online condolensces may be made at www.harvesthilsfuneralhome.com In lieu of flowers, family request donations be made to the church of your choice.

The family of Marguerite Blacklock Wolfe Burden created this Life Tributes page to make it easy to share your memories.

Send flowers to the Burden family.