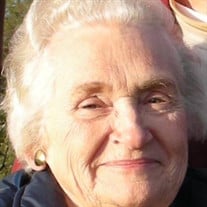 Marguerite Lucille Reed Dayton passed into the arms of her Lord and Savior quietly in her sleep, at Hico Nursing and Rehab on April 16, 2022. Lucille was born on November 12, 1932 in Santa Fe Hospital in Temple, Texas to parents Wallace Houston Reed and Vera Mae Scudder Reed. Lucille’s ancestors moved to Bell County, Texas in 1831, received a Spanish land grant in 1832, and established a ranch near Holland, Texas. She graduated from Holland High School in 1950, then attended Southwestern University in Georgetown, Texas where she met the love of her life, Charles Dayton, both of whom were attending university as freshmen. Lucille graduated university in 1953 with a BA degree, majoring in English and minoring in Secondary Education, and received Magna Cum Laude honors. Lucille and Charlie were married August 21, 1953, on Lucille's mother's birthday. She attained her MA in 1954, and went to summer school to get a teaching certificate for elementary education. Lucille taught 3rd grade at Island Rural School in Galveston, where Charlie attended UTMB medical school. In 1959 they moved to Cedar Rapids, Iowa, where Charlie interned and Lucille was a stay-at-home mom. Their son Brian was born in Galveston in 1958, and daughter Sylvia was born in Cedar Rapids in 1959. They moved to Mason City, Iowa, where Charlie did a surgical residency and where son James was born in 1960. Charlie and Lucille and family moved to Hico, Texas in 1961, where daughter Stephanie was born in 1972, and where Charlie began a medical practice at Hico Clinic and later became a partner with Dr. Hedges and Dr. Hafer. Lucille was a stay-at-home mom while doing a lot of volunteer work in Hico. Lucille was very active in the Hico First United Methodist Church, where she taught Sunday school for youth for 45 plus years and also sang in the church choir for 50 years, until she developed some memory loss. She was very active in Methodist Women, and was president and held other offices. Lucille was active in Council of Government and, along with Dianne Stone and others, was responsible for getting the esplanade in Hico. She was a member of the Hico Review club for many years, and was a local officer and attained state officer status. Hico Hospital closed in 1990, and Hico developed a volunteer ambulance service. Lucille went to school and trained and became a EMT and volunteered many hours on the ambulance over the next seven years. She was a Girl Scout leader and Boy Scout leader, and became a district Girl Scout board member and volunteered in that organization for several years. In 2002, Charlie led a medical mission trip to Democratic Republic of Congo, which was organized and sponsored by the Hico First Methodist Church. Lucille didn't feel she could help and chose not to go, but after hearing more about it, she wanted to go on future trips if they were organized. She accompanied Charlie and others on five more trips to DRC. She and Charlie brought a young Congolese man over to the States, and helped him attend University. J C Mande was a wonderful young man who was a part of Lucille's life, and the Daytons believed he brought a lot to the Hico community. Lucille is preceded in death by an infant son, Michael Allen Dayton; her parents, Houston and Vera Reed; brothers, Lewis Reed and wife Debbie, and Donald Reed; sister, Roberta Reed Petrie and husband Laurence Petrie; and niece, Cathy Rector. Lucille is survived by her husband of almost 69 years, Billy Charles Dayton, MD, and their four children and three grandchildren: Brian Charles Dayton and wife Jennifer and their son Jack, Sylvia Elaine Stidham and husband Bobby, James Eric Dayton and wife Christy and their children Ari and Sadie, and daughter Stephanie Gay Dayton and husband Jason Phillips. She is also survived by a sister-in-law, Shirley Reed, and a brother-in-law, Harold Dayton, as well as nieces and nephews, great nieces and a multitude of wonderful friends. Lucille was a faithful follower of Jesus and a loving wife and mother. She loved her family, her church family, and her community. Lucille loved to cook, work with children, volunteer, and travel. She will be missed by a loving family and a multitude of friends. Celebration of Life services, Saturday, May 7, 2022, at First United Methodist Church, Hico, Texas, with Rev. Don Moore officiating.

Marguerite Lucille Reed Dayton passed into the arms of her Lord and Savior quietly in her sleep, at Hico Nursing and Rehab on April 16, 2022. Lucille was born on November 12, 1932 in Santa Fe Hospital in Temple, Texas to parents Wallace Houston... View Obituary & Service Information

The family of Marguerite "Lucille" Dayton created this Life Tributes page to make it easy to share your memories.

Marguerite Lucille Reed Dayton passed into the arms of her Lord...

Send flowers to the Dayton family.