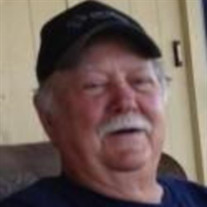 Michael Ramon Smith Michael “Big Mike” Ramon Smith, born Sept. 29, 1941, passed away on May 18, 2021. Mike was born in Ft. Worth, Texas to George and Ruby Smith. He attended Trimble Tech in Ft. Worth. He was a member of the National Guard. He married Gladys Marie Brown on Dec. 23, 1960 in Ft. Worth. “Yes” that was 60 years of marriage. In 1961, President John F. Kennedy called the 49th Armored Division to active duty during the Berlin Crisis. Mike was the MOS 130 Tank Commander. His passion has always been cars. He went to work at a body shop in Ft. Worth, where he learned to repair cars and he continued repairing cars the rest of his life, owning his own shop in Duffau and Hico. He spent the last several years working on his own personal projects. He could build or fix anything and run any kind of equipment. His final project was a Model T Speedster built from scratch. He loved his wife, kids, grandkids, great grandkids, extended family, friends and his dogs and animals. Fishing trips were always a lot of fun and a great time spent with family and friends. He also loved to have a cold one and storytell with family and friends at swap meets, car shows, gun shows, arrowhead hunting, metal detecting, dirt track racing, dirt roading, his shop, and the front porch. He’d say, “Is it 4 o’ clock yet? Well, close enough.” He became a part of the Hico community in 1970. In the 1980’s he and a few of his friends were who originated the Hico Christmas Fund for Kids, raising money with a dance, buying, wrapping, and delivering presents. He also helped at several Old Settler parades and was the head organizer of the Hico Swap Meet. He was preceded in death by his parents, and his sister Kathleen McIntyre. He is survived by his wife Marie, of Hico; his son and wife, Michael & Jodi Smith, of Bunch, OK; daughter and husband Wendy & Mike Epley, of Hico. Grandchildren: Andrew Smith & Danae, Joshua Smith & Lacey, Mitchell Turner, Mathew Epley, Britt Epley & Brittany, Dakota Smith, J Epley & Alexis, Sydney Smith, Sammy Smith, Addison Smith, Montana Smith; and 24 great grandchildren. Graveside services, 1:00pm, Sunday, May 23, 2021,at Ramsey Cemetery. Grandsons will serve as pallbearers. Special friends Fred B. Parker, Doug Moon, Jim Long, Montye Ogle, Marvin Steel, Robert Spolek, Bob Bissonnette, Ed Williams, Gary Duncan, and numerous others. Good friend Tim Long will officiate.

The family of Michael "Big Mike" Ramon Smith created this Life Tributes page to make it easy to share your memories.

Send flowers to the Smith family.