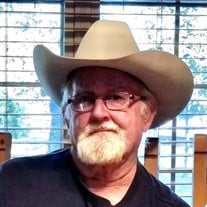 Nolan Floyd Keeter, 84, of Hamilton, Texas passed away on Feburary 18, 2022. Nolan was born on September 22, 1937 to Ferol and Lena Keeter in Dublin, Texas. He was a spelling and math whiz in school and played football for the Hamilton Bulldogs. Upon graduation from high school he became an apprentice working laying floors and worked in that field for 51 years before retiring. Nolan was a farmer and rancher all of his life. He lived and worked in Fort Worth, Texas during the week and would travel to Hamilton every weekend, kids and horses in tow, to work side by side with his parents, raising cattle and farming the fields. In June of 1968 he attended night school to become an auctioneer. He graduated first in his class and ended up doing radio spots to promote the auctioneering school. Nolan was a man of great faith and believed in right from wrong, keeping your word, loving God and your family above all else, and going to God in prayer daily with all of your worries, cares, and thankfulness. He was a fixture in town often seen picking up feed for his cattle, going to Sonic for the ice he loved, and dropping by Brandi’s for chewing tobacco with his beloved little dog Cupid riding along in his lap. He was blessed to have a loving family but also had friends in the Hamilton community that loved him and looked out for him. The family would like to acknowledge and thank Jake and Brandi Murphree, their sons Zeb and Jace and Jamie Martin. Also, Mary Owen, the sweet ladies at the Hamilton Wound Clinic, and Kristi Armstrong at Brookshires Pharmacy. Nolan was beloved and respected by his family and is survived by his three daughters: Belinda Tijerina (Roy) of Bishop, Texas, Judy Loftin (Jim) of Alvarado, Texas, and Marilyn Henderson (Clint) of Tolar, Texas. Four grandchildren: Justin Norris (Carolyn), Kelly Alvarez (Aaron), Blake Henderson (Ashlee), Payden Henderson (Aspynn). Four great grandchildren: Jaya McCarty, Laynee McCarty, Leighton Henderson, and Blakely Henderson. His brother Dick Keeter and the mother of his children, Manon Keeter. Numerous nieces and nephews. He is proceeded in death by his parents, his grandson Cody McCarty, brothers Bob and Jack Keeter, and sister Alene Yant. Celebration of Life Services, 10:00 am, March 12, 2022, at Harvest Hills Funeral Home, with Don Moore officiating.

Nolan Floyd Keeter, 84, of Hamilton, Texas passed away on Feburary 18, 2022. Nolan was born on September 22, 1937 to Ferol and Lena Keeter in Dublin, Texas. He was a spelling and math whiz in school and played football for the Hamilton Bulldogs.... View Obituary & Service Information

The family of Nolan Floyd Keeter created this Life Tributes page to make it easy to share your memories.

Nolan Floyd Keeter, 84, of Hamilton, Texas passed away on Feburary...

Send flowers to the Keeter family.