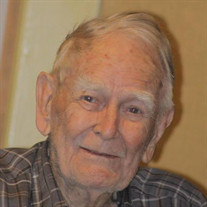 Local resident Raymond Richard Hefner passed away peacefully on Tuesday, January 12, 2016, at his home in Hico, with family at his side. Raymond reached the age 91 years 5 months 8 days. Raymond was born in Hico on August 4, 1924, to Omeler and Zula Hefner. As he was growing up in Hico, he spent much time outdoors and taking on various jobs. He would pluck turkeys, sweep up at the photography studio, pick cotton, deliver papers, manage the night shift at the truck stop, play high school football, hang out with friends at the swimming hole, hitch-hike, and chase hot air balloons. After graduating from Hico High School, he joined the Navy in December of 1941. He would go on to serve in the Pacific for two and a half years during World War II, before being transferred back to Texas to spend the rest of his Navy service in an educational program at Southwestern University. His time in the Navy included guard duty where he would challenge Admiral Nimitz for identification, time at an underground Army camp in the Aliamanu volcanic crater, message decoding, pilot rescues out at sea, a shipwreck off the California coast, and meeting the love of his life, Mary Theresa Klein Hefner. Mary volunteered with the USO and had many pen pals in the service, one of whom served on the Peridot with Raymond and would share Mary’s letters with him. When shore leave came, the pen pal was not able to make the trip to see Mary, so Raymond decided to go meet her instead. That meeting led to 60 happy years together. Raymond and Mary lived in Dallas where they raised their 7 children. When it was time to retire, they returned to the small town life in Raymond’s hometown of Hico, to live in a house that Raymond had spent time in as a boy, when it was owned by his Aunt Oleta Hughes. He enjoyed golfing and dominoes at the Bluebonnet Country Club, and attending the Old Settlers reunions to see old friends. Raymond was the go-to person here in Hico for local history, geographical and genealogical, and was known for his story-telling, especially about his Hico childhood, Navy experiences and Texas travels. Raymond’s stories and his sense of humor will be greatly missed by his family and the community. Raymond was preceded in death by his brother, O.W. Hefner, wife Mary Theresa Hefner, and grandson Shawn P. Hefner. He is survived by his son Richard, his wife Pat, their daughter Erica and grandson Alexander; daughter Mary Ellen; daughter Julia, her husband David and their son Sean; daughter Susan, her husband Bill, their daughter Mary Theresa and grandsons Braden and Landry; son Henry, his wife Nancy, their daughter Melissa and son Joseph; son Patrick, his wife Robin, their son Brandon and grandson Shawn, daughter Meagan and grandson Aiden; son George and his wife Esther, their son Curtis, daughter Rachel, grandson Miles and granddaughter Scarlett; brother Donald Hefner, and his wife Willadean. Survivors include daughters: Mary Ellen Hefner, Julia McMillin & husband David Susan Stone & husband Bill, Sons: Richard & wife Pat, Henry & wife Nancy, Patrick & wife, Robin George & wife Esther, Brothers: Donald Hefner & wife Willadean 11 Grandchildren & 7 Great-Grandchildren

Local resident Raymond Richard Hefner passed away peacefully on Tuesday, January 12, 2016, at his home in Hico, with family at his side. Raymond reached the age 91 years 5 months 8 days. Raymond was born in Hico on August 4, 1924, to Omeler... View Obituary & Service Information

The family of Raymond Richard Hefner created this Life Tributes page to make it easy to share your memories.

Send flowers to the Hefner family.